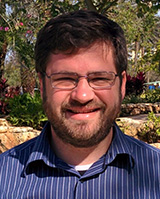 Dr. Wagner is an Instructor at Washington University School of Medicine, where he leads the development of tools and standards for advancing precision medicine and our knowledge of genomic alterations in cancers. Dr. Wagner serves as co-director for the VICC, as well as co-leader of the Variant Representation group of the Global Alliance for Genomics and Health. He is also an active member of the ClinGen Somatic Working Group and the American Society of Hematology Somatic Working Group.

In his postdoctoral work at Washington University, Dr. Wagner co-developed several precision medicine web tools, including the popular Drug-Gene Interaction Database, the database of Clinical Interpretations of Variants in Cancer (CIViC), and the VICC meta-knowledgebase. He is also a lead developer of the GA4GH Variation Representation Specification (VRS), a computational framework for precisely representing and sharing variation across systems.

In collaboration with his colleagues at the Siteman Cancer Center, Dr. Wagner also led the integrative analysis of tumor sequencing data from a relapsed small cell lung cancer cohort. His work demonstrated WNT signaling activation as a recurrent mechanism of acquired chemoresistance in this aggressive tumor type.

These and other research projects have contributed to over 20 works published throughout Dr. Wagner’s training, which have accumulated over 1000 citations. He has also held several NIH grants as PI, including both an F32 NRSA Postdoctoral Research Fellowship from the NCI and a K99/R00 Career Transition Award from the NHGRI. He plans to extend his expertise in medical informatics and cancer genomics into an independent research program, and is currently preparing to transition to Nationwide Children’s Hospital to complete his K99 training in an applied clinical setting. Dr. Wagner is a strong advocate for open science and the free exchange of biomedical knowledge.